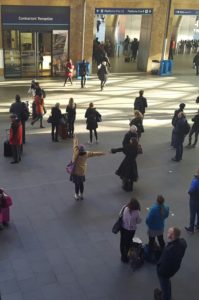 Starting where I left off in the last post I want to consider some of the critique that comes up with Socially engaged practice/art.

There is a very interesting article from the Guardian in 2008 here. It considers how Socially Engaged Art is/has been seen as activism,  combines with activism and at times suggests that it is ‘changing the world’ without any real influence. Artists appear to argue on both sides of this, many choosing to work outside of the ‘artworld’ in order to possibly make more effective change than they feel they can make by staying within it.

My initial feeling is that I think it is problematic for me as an artist to work with an assumption that I can change the world or that my work can! Optimism is always something I hold onto and I work with many others who do the same. I also work with many activists and campaigners, policy makers and those working within social and health arenas. What I am very aware of though is ‘Power’ and this is where I feel I need to be careful. There are assumptions made when you make statements about wanting change. An assumption that you have power over others who do not. That you hold power and can use it ‘FOR’ people who do not have power. Art can be ‘powerful’, as can advertising, propaganda, media and almost anything that communicates. But I am interested in how this power is held and with whom.

Should Artists ‘speak’ for others? What I try to do in some of my own practice is give space for voices that may not always be heard. I am not trying to change the world. In my work I am interested in listening and seeing, observing and being present with, talking and debating with others.

I AM interested in working with groups both within and without the art world. To guage debate, to see the societal micro structures and to bring them into open discussion if possible.

I have just ordered a copy of Art and Activism so that I can consider this further.

I know I also need to mention Bourriard here, and relational aesthetics. What I’m going to do for now is remind myself of what Claire Bishop says in Antagonism and Relational Aesthetics and also the counter letter by Liam Gillick.  (After reading Gillick’s response I will separately re-read Bourriard’s text myself as Bishop’s essay seems far less impartial than  I originally believed)

Relational Aesthetics is the term used by Bourriard to describe works based upon communication and exchange. In turn Grant Kester uses the term dialogical art practice and his article Conversation pieces examines the role of Dialogue in Socially Engaged Art.

Modern Art (Avante Garde) worked under the premise that our knowledge was in no way objective and the audience should be shocked out of their world into seeing what structures were underlying it…. so the idea that the artists would work ‘with’ and use discourse in their work with its inherent structural problems and socio-linguistic issues turns this on its head.

Based on Habermas’s theory Dialogic Aesthetics according to Kester, are different from traditional aesthetics in two ways: through the work not making any claims at universality; and in that traditional aesthetics asks of an audience to open their mind after the encounter, while Dialogic aesthetics asks the audience to use their mind and subjectivity within/during the discourse itself. It is the discourse that forms the subject. A criticism of this is a lack of acknowledgement of the power relations in play within discourse.

Kester also interestingly for me talks about ‘Womens Ways Of Knowing’ by Belenkey (1986), which seemingly according to Kester more accurately recognises the social relations that occur within conversations and discussions including acknowledging the power structures in place. This area also considers the power of empathy within discursive work, and how important listening is as well as arguing/agreeing with others.

For me this last point is essential. It is vital that I acknowledge the conditions under and in which my projects come about and exist… and engage… Bishop suggests that to be truly democratic we need antagonism. Antagonism creates debate and discussion, democracy needs debate and discussion (Bishop and Lacan argue) in order to allow for ideology and change. Is it democracy that I am seeking?

Bishop goes on to talk about Artists left out in Bourriards work, Santiago Sierra and Thomas Hirschorn. These artists retain the tension, the antaonism wthin the relations… which is more honest and far more democratic in her opinion.

So in my own work, especially the workshops, is it the tension that will exist due to my being the outsider  that is as important to the practice as the workshops themselves.

I was going to end with a quote from Bishop in her conclusion,

‘The tasks facing us today are to analyze how contemporary art addresses the viewer and to assess the quality of the audience relations it produces: the subject position that any work presupposes and the democratic notions it upholds, and how these are manifested in our experience of the work’.

However I then went on to read Liam Gillick’s letter in response to Bishops’s essay. It is very interesting and creates great debate and challenge to Bishops writing n the subject. It can be found in full here