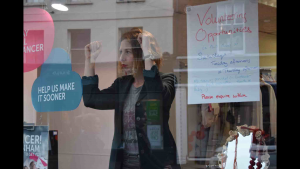 Susan Merrick is a multi-disciplinary Artist. She is interested in conversations, language and communication, in questioning whose voices are heard, and in the access and spaces that can challenge or facilitate this.
With a background in BSL/English Interpreting and Sociology she makes work, projects and collaborations exploring these themes, utilising a context-based mix of social engagement, performance and live art, public installations, film making and photography.

Woman Up Podcast series, Collaboration with Desperate Artwives and in association with Womens’ Art Library.

West End Centre, Aldershot – Associate Artist Residency (Funded with part of an award from Arts Council England as part of some R&D time)

Hollaback London: I was 1 of 16 Artists invited as part of the 16 days of creative action across London

What does it mean to be Artist in Residence of a Place?: LADA DIY 14 workshops, Lead Artist with Bridget Floyer.

In Our Minds: Collaborative project and touring exhibition with UCA and National Archives

She’s in a Nightie and So Forth!, Performance, Unperforming 6, 43 Inverness St Gallery, Camden, London

Editorial illustrations for The Mother Magazine

Colouring Book for The Mother Magazine

Illustrations and Images for The Mother Magazine

Produced illustrations for a new book ‘Cycle to the Moon’ by Veronika Sophia Robinson. Published by Starflower Press, 2014