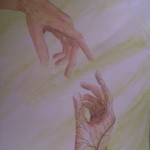 They were the first part of me to discover something after I was born. They discovered my dad, as he placed his hand into the incubator I was placed in. They grabbed hold of his finger and gripped tightly.

They became a comfort in the form of my thumb as I gained my first ‘habit’!

My hands found objects, play things, food as I discovered it. They began to draw and write and create as soon as they were able.

They held horses reins, they held ballet bars, did karate moves and held me as I did gymnastic flips.

They tried smoking, cassette players, hands to hold and how to inflict pain on myself. They also cared, looking after others, bringing tea and holding more hands in comfort. They were held up high at raves or gigs, they waved goodbye to family and friends when I moved away.

They wrote essays and dissertations at uni, learnt to create hairstyles that I was finally happy with, drink pints and shots and catch a rugby ball.

They met my future husband, and fell in love.

They learnt sign language and found a whole new expression. They continued to draw but with apprehension.

They supported deafblind adults being eyes as well as ears. They became more fluent less staccato and they found a career as an interpreter.

They exchanged rings and held champagne and held onto my man.

They grew tired, they found stress, they found their own pain and slowly stopped working. They stopped being able to type, to do buttons and hold the kettle….

So they stopped. Still, for 3 months. Until they recovered and could work again. They found a pencil, a brush and began to create.

They slowly began to interpret again and created paintings and drawings too.

Then they held a swollen belly and then our babies, loved them and carried them, held them while they fed. Dressed them, changed them and kept them safe.

They learnt a new love of gin and red wine and the need to relax when they weren’t needed!

They held more hands and stroked shoulders and backs of others in labour and birth.
They spent more and more time creating. Painting, drawing, touching and manipulating materials and loving it.

They also for the last time held the first hand that they had met, the frail hand of dad as he was slipping away from this life.

They hold too much coffee and not enough gin. They love creating and love having a rest. They still hold our babies who are bigger now, and still try to keep them safe.

They are my tools, my translators, my work and my play. So thank you hands. Thank you everyday.