Weekly Wonderings #38 ‘She’s in a nightie and so forth!’ Video piece. 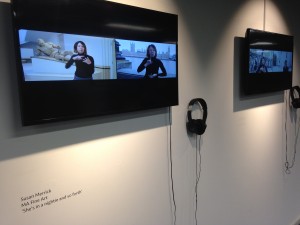 (This blog is an ongoing piece of work so referencing will be added where appropriate at later dates).

The piece I have on display at the UCA Farnham campus at the moment is stirring up a bit of interest. So I wanted to share some background and some of my process with you.

For the Rethinking The Body exhibition the curator Rebekah Taylor of UCA archives asked us to respond to a couple of the collections of archives that she had pulled out. I was initially drawn to the huge amount of material that looked at power inequalities and issues around working class communities and women within art education in the late 80s early 90s.

I was immediately pulled to use BSL as a material and the reasons for this were pretty wide. One of the main considerations is the power associated with interpreters, their ability (and necessary awareness of this ability) to corrupt and control meaning when interpreting.

As I was about to leave the archives a letter from a gentleman who was concerned about a conference he had attended in the early 90s. He was questioning the level of language used and access to the academic information being given and that it was wholly inaccessible for many of his group. This type of inaccessibility is seen so frequently within my work as an interpreter that it immediately struck a chord.

From my visit to the archives I found myself delving deeper into a different archive- in those of Bethlam Royal Hospital. I had started to source quotes about women, pulling together areas of interest to me in feminism (and equality in general), philosophy and language.

The oppression and power linked with BSL is useful in referencing the oppression of women that the quotes I sourced reflect. In specifically sourcing quotes about women I found that what I was doing was removing context, history, speaker and thus in some way changing the dynamics of power. I started to wonder that by taking a quote from a text it perhaps gives it a power that it may lose completely when in its original form! Also a piece of speech that was incredibly powerful in its context may lose any sense of meaning when spoken in isolation.

When looking at language and understanding linked to context I wanted to form barriers to this, reducing what information was given to both audiences. Removing the original context I had already managed to fragment the pieces of information losing the where/when and with whom they were spoken or written.

The piece consists of 8 video clips of 8 translated quotes, filmed in 4 different locations significant to the quotes. For the hearing audience and not BSL (British sign language) users, they will not know what is being said, they instead may notice my face expressions and movements. They notice the backgrounds of the video clips: Bethlam Royal Hospital, The Houses of Parliament, The Royal Courts of Justice and St Pauls Cathedral. They see I am a woman, and I am using a language that is usually and often patronisingly seen as ‘nice’ or ‘interesting’. They may try to listen to the head phones that will offer them no voice over. They may look for subtitles only to find none. Some will try to engage in an understanding from simply viewing. Others will simply walk on.

For BSL users watching the videos they may see what is being said first, and possibly wonder why I am saying such negative things about women….. It is not obvious that I am translating, except for the headphones that appear from my ears at times. They then may start to notice the backgrounds and wonder at the whole situation.

The quotes I am translating in the piece all come from men, including some historical political speeches, some discussion in law, a piece of biblical script and some very recent trolling tweets. As I researched I became interested in taking quotes that embody the harm that has perpetuated throughout history via language. I chose in this instance to focus on women, for example ideas of women and hysteria in mental health- and the use of language today that still reflects elements of this same historical view.

Some of the artists that I have looked at specifically during this early stage of my MA development have been Fiona Banner, Tere Racarens, Kutlug Ataman, Ceal Floyer, Doris Selsado and Andrei Tarkovsky.

The issues that this piece raises for me undoubtedly include those of assumption. I have to acknowledge that I cannot know how the audience views this. Understanding is also inherently subject to the surrounding environment and current context that this piece is created within. The context of the exhibition, my own gender, race, culture, age and intents as well as of those who view it. I cannot start considering deconstruction and mediation without looking at how my work sits and is influenced and shaped.

I am by no means done critiquing and investigating this piece of work, and my art development will continue in these themes of translation, meaning and mediation.

I am going to spend some time considering the idea of the ‘sentence – image’ as described by Ranciere (2007) and continue to read into semiotics, feminism and language, Derridas ideas of meaning and language, and the void that translation encompasses within the possible and impossible.

The books/articles I have both used and am using to mess with my brain further are:

The below is one of the pieces I read on Derrida’s ideas that became known as Deconstructionist theory.

An extract from The Cambridge History of Literary Criticism — vol.8 From Formalism to Poststructuralism. Cambridge University Press, 1995 https://prelectur.stanford.edu/lecturers/derrida/rorty.html
I am also starting to step up my reading around Foucault, Derrida and more contemporary discussions of their work including Zizec….. Whom I am determined to get to grips with!

For other sources of Artists working with BSL or sign language please see my previous blog post!