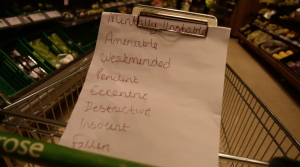 I just googled ‘Why it’s important to get your Art work in public’. I was looking for a good quote to use…. But instead I cam across page after page of ‘how to sell your art’, ‘how to price your art’ etc. So instead I will tell you my reason for seeing lots art and getting work ‘out’. I go and see, hear, touch, experience other people’s art in order to think about it, it’s context, whether it makes me ask any questions or feel a certain way. I make my own work as a way of ‘thinking’, of responding, of reacting and of inviting others to also think about something, respond or react to it…… But hopefully to also talk about it.

Last week I exhibited my piece Shopping List in the Bound|Lines group exhibition at Iklectik Art Lab in London.

Shopping List
Shopping List is film piece focusing on a supermarket trolley being pushed around a supermarket, a shopping list, and the items that I chose to put in the trolley in relation to the shopping list. The list does not hold the usual groceries, it holds a few terms that label behaviour and attitude. Specifically terms that were used to label the behaviours and attitudes of suffragette prisoners in prison reports during 1917.

I wanted to pull these labels forwards into 2016, into our consumerist lives and into an age when we still constantly label ourselves and each other. Categories and lists are used to diagnose in medicine and mental health, to group people socially and economically. These labels, categories and lists can help people get support, medicine or finances. They can also cause prejudice and power imbalance. Labels can be an excuse or a justification, a thing of pride or of shame. They can identify and discriminate.
The film was projected through a hanging shopping trolley, the same trolley that was used in the film. I wanted to embody something physical in the projection, a way of considering the presentation and leaving a trace of the performance alongside the film.

So did it work?
The way I filmed this piece has some issues as the camera was simply hung around my neck. This means that the focus comes in and out. It also limited the angle of the camera meaning that only the shopping list is visible for most of the film. It would be interesting to try this with some longer shots, taking in more of the supermarket as a whole. I initially filmed this covertly, so to films in a more ‘professional’ way with different shots set up I will need to work with the supermarket.
Projecting through the trolley gave an interesting perspective, the grid of the trolley looking like the grid of a chart, or a series of tiny screens. It did also however distort the film, and may have taken away from the visuals I intended from within the film.

Moving forward I would like to re-shoot this piece. Using some longer shots up the aisles, a steady-cam on the trolley and another camera getting side shots of the trolley and shopper travelling through the store. Gaining the wider parts of the shopping experience as well as the close ups of the list and the products.

Other elements to test would be to show it as a film on its own. As a projection or on a screen. Perhaps to have it shown similar to an advert online or in a supermarket itself. On exhibiting would it be interesting to assimilate the products I chose and exhibit them alongside the film. Create a supermarket shelf or place them in the trolley?

What I want to continue considering in this work is the power that the language of labels and categories have on us. Whether it’s in advertising, in mental health or in socialisation and self identity.