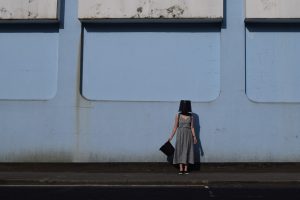 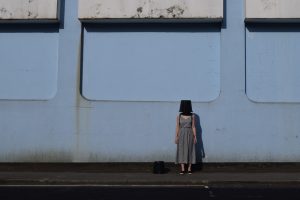 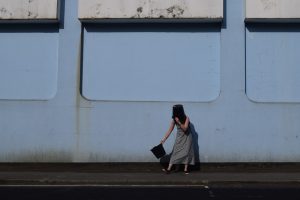 During the Summer I continued my exploration with cups, tin cans and string. I tried out different materials and vessels to see what would work and what sizes would work. I found that the act of being given a communication tool like this, no matter the size, encouraged people to play. Conversations began usually the same way… Hello! Can you hear me?

So my next though was how to use this in a way that didn’t only end in nervous giggles. The privacy of the wall in my exhibition Child’s Play worked well but taking a large wall everywhere I went was not really achievable.

I decided to test how this would work in order to engage with public spaces by taking the tin and strings and the buckets and string into my local town.

My first visit encouraged no interaction what so ever. Partly due to the early time of day, so people were rushing to work (and it was very quiet), but also I wasn’t quite sure myself of the purpose. I became frustrated and decided to call it a failure and simply place the bucket on my head. Immediately I felt self conscious and suddenly very visible… whilst also incredibly anonymous as my head was covered.

I enjoyed the feeling except for the fact that I could no longer see the camera that I brought with me and started to fear it being taken (which the Uni probably wouldn’t take very happily!). The result was a short film of me stood in the street with a bucket on my head, and also the recordings and memories of passer by comments.

One man asked ‘Why is that woman stood with a bucket on her head?’

Answer from a woman ‘I dunno, it’s Aldershot, anything can happen’.

After this session I was determined to try it again but I wanted to think about it a bit more first. I wanted to absorb some of the community around me. It’s my community. But often, in the town centre everyone simply ignores one another! This type of performance, one looking at discomfort and communication often invites nudity from within the Art student world, and I was keen to avoid this. Not for any prudish sense, but simply because it feels a little obvious to head down that route. So instead I ‘added’ clothing. I chose three outfits that for me represented the community, me and my actions. I started all in black, like a mime artist would wear. I then added a fairly feminine dress, the mother in me, I ended with a full wet weather set of Army fatigues. The town is a military town and not only that but several members of our family have been in the forces and this kit was loaned to me by my lovely father-in-law.

So I did it again. (With friends this time to watch the camera). I simply set myself up on a street corner with the bucket on my head, and began dressing.

This time I attracted quite a bit of interest. With several members of the public coming to talk to me about what I was doing.

By adding the bucket to my head, and locating myself somewhere busy but with a captive audience (a coffee shop) I discovered that I became VERY visible. I also seemed to become approachable…. perhaps because I had no face, or because what I was doing was quite ridiculous, so them approaching me could not be more ridiculous. I stayed under the bucket for about 15 minutes and on emerging I had more questions from those who had been watching. Interestingly the topic turned to local and racial politics quite quickly, with complete strangers who would never normally have spoken to me.

I am going to consider this idea of visibility more through the year, with regard to communication and language. It certainly does give more power… but does it also reduce power in this sense and risk becoming a gimmick?

Im hopefully going to speak to The infamous Guerrilla Girls in october, and as activists who have been covering their faces since their inception I want to see what they think of the subject.