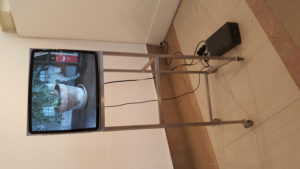 The above Facebook post was a little snapshot of my visit to Southampton with a group of fellow artists and MA students. We went to visit the British Art Show 8 and it gave me a lot to think about.

Often when I visit exhibitions I tire pretty quickly. Usually it’s the lack of Windows and the intensity of visual and mental stimulation. But with this show I was left hungry for more. I could have stayed all week.  This was interesting for me as a viewer but also as an Artist. Is this something beyond our control as Artists, dependent really on the feelings and behaviour, timing for the audience? Or can we influence this when considering how to show our work?

Yesterday I had a discussion with peers at UCA about ‘The Spectator’, considering themes from Rancière’s The Emancipated Spectator as well as the ideas of Brecht and Artaud. Do we have expectations about what our audience see in or from the work? Do we discuss here intentions? Rancière discusses the notion that there is a belief that Artists want to allow the audience free autonomy in seeing their work, but also hold judgements about what their work means and that the audience will understand this or some of it. He also discusses the ownership of the viewer in their interpretation or observations of the work. That they create their own understanding and in this they create their own work from it.

In considering this idea with my own work I began to think about my own ‘expectations’ of an audience of my work. What do I want? What do I expect or hope and audience gets from or does with my work? For a start, I feel that depends entirely on the audience. Who are they? Are they Art students? Passers by? people who know my work or not?

I’ve spoken before about my reasons for using visual communication in my work. Sign language and semaphore for example, and how I use avoidance of communication through using these lesser known methods or using other objects to prevent communication such as placing an object over my head. I often intend to obscure messages or communication in an attempt to promote discussion. But this is a risky process. When a viewer sees something very visual does that really hold their attention if they cannot understand what is being said?

As an Artist I want to engage with a viewer, about my work and WITH my work.

So I started to think about the pieces I saw in the British Art Show 8 that made me want more, that made me sit and look or watch, that made me stay and consider it or remember it. Something else to mention here is the fact that as well as it all being incredibly subjective, it is also in my opinion related to a very many individual variants. Perhaps I had had the perfect amount of food and drink to feel alert. I had plenty of time so I was relaxed enough to soak in the work. Perhaps that morning I had the right conversations that led me to be in the right frame of mind to consider the Art more thoroughly. But also I feel credit has to go out to the Artists and curators. The pieces that pulled me in, that kept me there and linger in my mind do so because of what they are, what they did or represented to me, or because of how they were set up.

The pieces that involved me sitting and being comfortable, made me stay longer. I am a big fan of moving image so I was automatically more attracted to pieces that use this. Works that kept me interested through a narrative or changing visuals/text or that showed a new level of themselves as I looked and watched. One such piece was Charlotte Prodger’s ‘Max The English Bull Terrier Trancing’. Initially drawn to the strange looking screen on its stilts and in its bespoke container I then became ‘entertained’ by the Trancing of the dogs on the screen. As I watched I was entertained and interested but wondered what was critical about such an event. It seemed on first appearances that the artist had filmed her dog doing this….. Until I read the info card. The simple addition of the words ‘ripped from YouTube’ changed my viewing of the work. In using the videos of others Prodger’s work becomes critical, not because of the appropriation, but because of what it then potentially discusses. Our use of social media, our obsessions with watching funny videos especially about animals, it becomes a social commentary on views about animals and views about ourselves.

In our discussion yesterday we discussed the idea of context for the artist and also viewer. As a viewer I mentioned that I look for context. Sometimes through some text but that it can also come from what the artist has used to frame the work. The space, the material, the title, the organisation of pieces, how the work is set up. Approaching the topic I thought that I perhaps look for too much information. A background of the work and artist, perhaps a meeting with them and listening to a talk. This certainly helps inform me, but of what? Perhaps of what ‘they’ intend for the work. As an Artist looking from the other perspective, I don’t want to ‘give everything’. If I tell the viewer what they should feel, think and take from the work, why would they be interested in it? It no longer does anything. So it is in how the work is used or shown, how it is disseminated perhaps that is most important.

I am moving into some work involving participation currently, thus creating an audience as the work is made. This again changes the context of the work and creates potential problems or benefits of spectator/artist/participant divides. It will be interesting to consider how this changes or influences my work or how I use it.  It also gives me a great opportunity to work with spectators as part of my work process. I will consider this a little more in my next post.