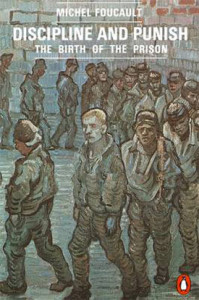 I remember the cover of Michel Foucault’s Discipline and Punish from my BA Sociology days, I remember the drawings of prisons and the shadows of Foucault’s ideologies. I say shadows as I have retained little memory of them without re reading.

So, part way into my MA in Fine Art I am back at the bookshelves grabbing books of Foucault, Feminism and Derrida. Language and Power, Gender, Language and Power, are all committed elements within my work. They keep returning in some shape or form and so I want to look further at where these themes emerge in my Art and can also inspire my art.

This week I compiled the eight video clips that I had collected of the blind translations and responses that I have been doing and created an eight image film. Looking a little like the brady bunch (film clips popping up and disappearing on and around the screen) I shared my compilation with my Artist peers. I need to learn a bit more about rendering the films in order to have smoother play of such large files, but apart from that it was really interesting to see the clips form as one film.

The successful elements of it were:

the physical responses each responder had. Some froze arms fixed at their sides, while others mirrored me. Those who felt less inhibited, either by age, artistic background or alcohol seemed more at ease to respond, but most responded in a verbal way;

the presentation of the clips on one screen – although this would look much better on a much larger surface, perhaps projected;

the sound. At times one speaker was discernible, at others it was a melee of english and noises. This felt appropriate as in these clips I was not actually relaying a message, I was only giving a visual action to those I knew could not understand. This gave all the power to me the giver, taking away much of the power of the responder. Making them in many cases feel uncomfortable and unsure what to do.

In fact this was perhaps the downside. I was actually at times ignoring the other person in order to continue with the message. Avoiding eye contact so that I wouldn’t be distracted/giggle or lose my thread. I struggled to hear the translation in my ear and also follow it while faced with a responder (so perhaps at these times the responder held the power?). This meant that the performance was very one-sided.

How does this relate to my work so far? Again, I was confusing or purposefully using a medium with participants that would not understand me. Withholding the message but requesting, while filmed, that those participants respond in some way.

I would like to move from this and look instead of deliberately withholding the message, instead let the message simply be the instigator. Allow the fluid definition of translation to come to work instead. to encourage this.

So what would happen if instead of having a speech to translate I only have a starting statement? A sign language translated phrase? An english phrase, a word? A movement? If I take the definition ‘translation’ that I looked at last week, and ask the ‘responder’ to look at that definition and respond as they see fit. What will happen? To have a collaborative performance, using different forms of translation and each persons understanding or ‘take’ on translation and each in turn respond to it.

I will invite some other artists and performers to work with me and respond to me, but first I need to consider how I introduce it to each participant – to remain consistent with each piece. And what statement/starting point I use.

The National Archives gave me some interesting material when I visited a few weeks ago. I may return to this to take this development further.

But for now I will leave the library with these wonderful books and my dear camera!

Foucault, M. (1983) This Is Not A Pipe, University of Chicago Press

Ramazanoglu, C. (1993) Up Against Foucault: Explorations of some tensions between Foucault and Feminism, Routledge, London