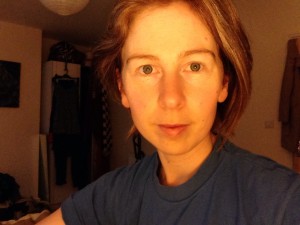 Today I’m still recovering from ‘the bug’ but it gives me chance to write a little more about why I started wearing makeup.

I started wearing makeup at quite a young age, I was 13/14. I think I’d ‘played’ with it before then, but at this age I started to wear it more often for school, dance shows, parties.

Growing up I was surrounded by women who wore makeup everyday. My mum didn’t wear loads but she always wore some. My extended family too. My grandma owned a hairdressers and from teenagers my mum and her sisters were encouraged to dress up and wear makeup to model for her. My mum has continued to wear small amounts of makeup everyday since. Even though she actually spent a large part of her adult life mucking out horses rather than ‘partying’!

My mum, one of my aunts and myself are all red heads. My mum has always been proud to be a red head but growing up with red hair can be quite difficult. Even as an adult I have still had taunts and jibes about it. I have fair skin which freckles easily and pale eyelashes. Initially I wore makeup because my friends did, so I copied their style. Early 90’s it was lots of kohl eyeliner and too much pale foundation. I thought I was disguising my freckles and enhancing my eyes. In photos I’ve seen often I was simply making my complexion sickly and my eyes have permanent black smudges around them!

As I grew older I added eyeshadows and adapted my shades and styles of base. As an adult I became more aware of what suited me and the magic of blushers and bronzers. The thing with makeup I found was that the more I wore it, the more I felt I needed it. Especially as I became better at applying it. I could make myself look more awake, tanned, have larger eyes, it was really fun! That element of makeup I do still really enjoy. I enjoy playing a part with makeup.

I’ve more recently been attracted to vintage makeup in the 1940s styles. Red lips and false eyelashes. However this is just for evenings out, I’ve always had much simpler makeup during the day. As an artist too I find it fun to play with how I look and what I can do with makeup.

I am still aware however that when I put makeup on everyday, that’s generally not for fun. It’s because I feel I need it. Because I still feel my pale skin and fair eyes doesn’t look ‘right’.

Growing up being taunted makes you very self conscious about yourself and I’m still affected by it. As an adult I have had comments made to me and towards my children which have been so hurtful. Generally people don’t mean to be unkind. They just don’t realise that what they are saying makes you feel strange/ weird/ugly. I am stronger for my children, and if comments are made in front of them then I turn them into positive ones.

‘Ooh H is looking very ginger today’ said with slightly mock horror face….. And I reply with a smile ‘yes she is isn’t she, it’s very beautiful isn’t it’.

Funnily I am very aware of how beautiful my children’s skin is too. My daughter has pale lashes but her eyes don’t look small they are giant eyes and she has pale and creamy skin, beautiful. My sons skin is like is more like mine with a few freckles and he is gorgeous. I wish I could have embraced my natural skin when I was younger!

This last week without makeup has made me start to look at my skin and eyes in a different way. I’m not looking and thinking, ‘I need some makeup on’, instead I’m looking for the positives. My skin feels freer, fresher and my wrinkles are less pronounced than when I have makeup on. My eyes do look different but they don’t look as ‘bad’ as I always thought they did.

I’m quite excited that I may be learning to love my skin and face without makeup. I still want to play with makeup for events, but to not use it everyday would be incredibly freeing.