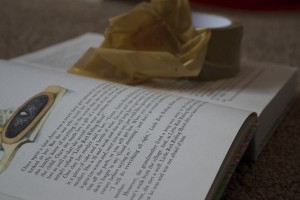 So this week I found myself filming the two pieces of text I had planned over the last month. One being a fairy tale – uncensored in all its Brother Grimm glory. The other a letter that I came across in the UCA Archives complaining about the censoring of an exhibition ‘Ecstatic Antibodies’ in the 1980s. The exhibition was aiming to communicate information contrary to the rampant myths of AIDS and HIV at the time.

I have two screens to use in the exhibition. Initially I was going to film two letters about censorship, one from the 80s and a more modern one. However the letter still feels pretty relevant! The letter mentions section 28 of the British Local Government Act 1988:

A local authority shall not

b) promote the teaching in any maintained school of the acceptability of homosexuality as a pretended family relationship.

and although this section was removed from statute in the early 2000s the effect of it still has influence in some of the documentation on sex education in some schools.

The reason I decided to put the fairy tale as the other screen came from my current work around nursery rhymes abs fairytales. These rhymes and tales, Marina Warner describes, form part of the basis for our language acquisition. Nonsense rhymes and noises help babies and children learn the sounds they will need later on in language. The tales and cautions teach us about social behaviours and the security of family. They have been passed down from generation to generation and in many cases printed by the millions. There have been versions that are deemed appropriate and others that have been censored in some way, often by the parents reading them as I found myself doing when my children were very small. There is even a hilarious book by James Finn Garner called ‘politically correct bedtime stories’ which I found brilliantly funny in its intentionally over- the-top PC translation of several of our beloved tales.

Essentially, this just struck me in terms of the inconsistency yet constant debate of censorship vs non censorship. The subject is huge and so I wanted to tie it in with my interest in language and understanding. So I came to filming a letter about censorship and an uncensored fairly gruesome fairytale. The letter about censorship I decided to censor too. Initially by ‘rasping’ over the words that would expose names or complete detail of the letter. After filming several versions I hadn’t quite felt it was doing what I wanted so irritated I found a roll of parcel tape and wrapped my face in it. This suddenly felt right for me. Unable to pronounce anything properly behind the tape I was at once censored and limited in my communication.