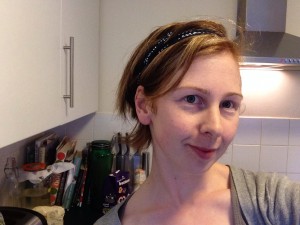 Today I thought I’d chat a little about words. Comments and words about our appearance whether meant negatively or not can affect us, affect our confidence, so we doubt ourselves and our looks. I’ve experienced this about several aspects of my appearance.

I remember growing up with many comments about my ginger hair. Terms that were nearly always meant as an insult. To have red/ginger hair was to be mocked. People were and still are often horrified if their child is born with red hair. Family members comment. Even strangers. A good friend (a fellow redhead) recently told me one such tale.

In his office at work a client came in and they were chatting about their children. She asked if his son also had red hair. When he replied to say that no he was actually blonde she responded with ‘oh that’s lucky then’.

As a teenager I remember changing shape and having comments shouted at me about my small chest, and my ginger hair.

My dad made a couple of jokey comments about a bit of weight gain when I was 16 and it stuck with me for so long!

As an adult I’ve had stages in my life where I’ve lost weight or been very toned and I at one point when I was a student I became quite obsessed with the positive comments about the change in my body…. When they stopped it was tempting to keep losing weight in order to keep getting the comments.

Since having children I’ve on both occasions lost the baby weight quickly, which has led to positive comments from some and negative comments from others. I’ve been told I look drained, tired, too skinny, a bit like a lollipop… And actually I was trying to eat as much as I could to gain a bit of flesh!

So what has this to do with makeup? Well, I’ve used makeup to:
Hide my colouring,
create new characters when I lacked confidence,
look less tired,
look younger/older,
look slimmer,
look plumper,
look more bronzed,
and even as a teenager look paler!

So we then have two takes on makeup in this sense. It can be argued that we are surrounded by ‘fake’ looking images of women, who rather than having normal colouring and shapes are photoshopped and heavily made up, which we then feel pressured to look like. But also makeup can help our confidence.

What a shame we are so crap at communicating with one another (or so good if that is then intended message). And how frustrating (I feel) that we can be so easily affected by what others think and say.

If you haven’t yet seen my Street Art video – Skin- please take a peek!