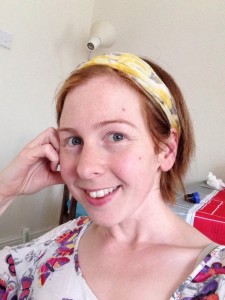 For me sexuality has often played a large part in my makeup wearing. Largely due to my reliance on makeup to feel attractive, and feeling attractive playing a large part in my own sexuality. Is this common for women in general? Women in the west? Is it just as much an issue for straight/gay/bi/trans women? Does class, income, race affect it? Or is it actually as individual as I think it might be? Depending on upbringing, culture, confidence, lifestyle, …… I could go on!

Going without makeup has forced me to look at myself, my face and body in a different way. This month I have had times when I have felt less attractive, but I’ve also had times when I’ve felt much more confident in myself. Attractiveness (or how attractive I feel) and sexuality are two very different things, I am aware of this, however for me personally they have always been intrinsically linked.

Through having children I felt a strength and empowerment over my body that I had never felt before. An ownership that I wished I had known when I was younger. Those who know me know I can talk for days about birth, I won’t here except to say one thing about it. I experienced both a Caesarean birth and then a VBAC (vaginal birth after caesarean). These two experiences have played a very large part in how I see my body and how I feel about myself. Both negatively and positively.

More recently through my art I am finding an expression of my female strength and sensuality. Being able to explore these elements through art is very liberating.

In terms of makeup it could be argued that it takes away our power and natural sensuality. Feeling so reliant on it as I have, does this somehow dampen my body ownership? I’m sure there are many arguments towards cosmetic companies and advertising to perpetuate this reliance too. Marketing which encourage us to look younger, fresher, smoother, painted, pouted and lashful! And then profit from our reliance on their products to do this!

But as we have already discussed, makeup is not new. It’s use has not appeared alongside mass media production. Men and women alike have used it for centuries for health, ritual, practical as well as enhancing reasons.

And personally I don’t think it does ‘take my power’. My reliance on it has been a pain definitely. But it’s at times given me a sense of power through the confidence it’s given me.

I’ve always worn makeup for both myself and my perceived appearance to others. What may make me feel fabulous after this month is to wear it only for me in future. Id love to hear other views on this. Whether others feel a similar reliance on makeup, have done previously and gotten over it? or is it just me?

If you haven’t yet seen my Street Art video – Skin- please take a peek!